I’ll tell you right now. When these babies were baking in the oven, they smelled like deep-fried elephant ears! Remember those? Do they even still make those at the fairs and such? Or what about churros? Maybe this could also be called churro pancake bites. Mmmm … see what happens when I start thinking about food: a chain reaction starts. One minute it’s pancakes and the next it’s a mexican dessert. Either way, these are delicious and guilt free. Kids will love them as they can dig in with their hands. Who am I kidding? Hands are the best utensils …

So for breakfast, brunch or late night dessert, it’s always a great time for pancake bites. In addition, the possibilities are endless! Consider stuffing each puff with a chocolate morsel and dipping them in caramel sauce. What about using bananas and walnuts and making a banana bread pancake bite? See, endless! (#weightwatcher points will vary of course 😛 )

(you will also need a mini muffin pan)

•Take your cinnamon & sugar grinder and crank it once over each cup of batter (or sprinkle your homemade mixture over top).
•Place in the oven (middle rack) and bake for 8-9 min or until center is done.
•While the pancake bites are baking, make the cinnamon maple cream and set aside (you could omit the cinnamon and just have maple cream. That would be delicious, too)
•When the bites are done baking, place them in a bowl while there are still warm and sprinkle on more cinnamon & sugar. Toss carefully to coat (this will be a light coating). 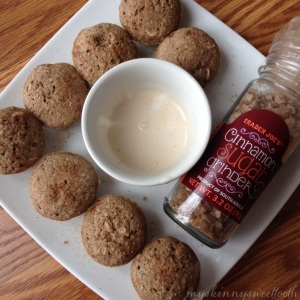 •Place the bites on a plate and serve along side of the cinnamon maple cream. Enjoy! 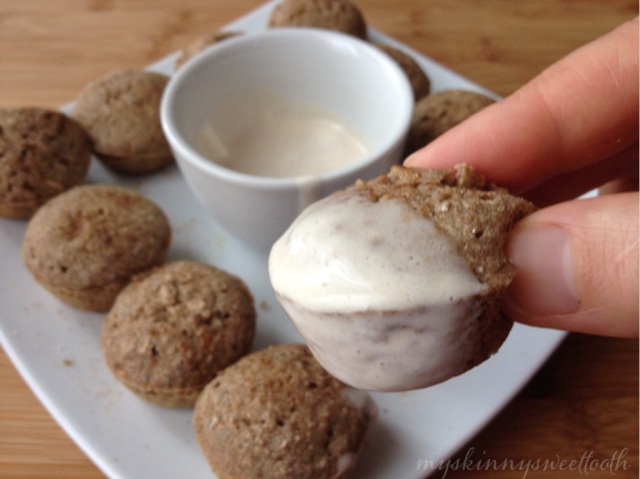 Published by My Skinny Sweet Tooth

View all posts by My Skinny Sweet Tooth